United States Department of Agriculture created The Food Pyramid which is based on the USDA’s Dietary Goals for Americans (DGA). It was designed to be a visual aid to promote healthy eating then by following the suggestions of the food pyramid Americans would have better nutrition and health. Grains, located at the bottom where the pyramid is larger, represent the largest number of servings, while salts and fats, which are recommended to be used sparingly, appear on the top.
The DGA are federal guidelines that were released in 1977 advises all people in America to reduce the fat in their diet and increase the carbohydrates, known to millions of adults and children symbolized by the Food Pyramid. 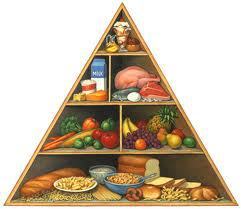 The Food Pyramid, according to a report “While the DGA are the bedrock of conventional nutrition today, what has been forgotten is that when they were issued, the benefits of eating more carbs and less fat were hotly debated within the scientific community.  Simply put, there wasn’t a lot of evidence to support the notion that reducing fat would lead to better health or weight loss.

Many prominent scientists openly questioned the DGA.  Philip Handler, president of the National Academy of Sciences, summed up their concerns in a rebuke he delivered to Congress in 1980:
“What right has the federal government to propose that the American people conduct a vast nutritional experiment, with themselves as subjects, on the strength of so very little evidence that it will do them any good?”

The DGA prevailed in spite of Dr. Handler’s protest (that’s a whole other story), and since 1977 Americans have dutifully increased the ratio of carbohydrates to fat in their diet.

Significant is that during  “…that time, the obesity rate has risen from 15% of the population to 35% today while the rate of diabetes has skyrocketed.”

“The development of an epidemic of overweight and diabetes under the guidance of the DGA would seem to call for a critical review of the guidelines. So when the DGA review committee recently rubber-stamped the goals, basically telling Americans to keep doing what they’ve been doing, a group of prominent health researchers had had enough.”

Adele Hite of the Gilling’s School of Global Public Health at the University of North Carolina led a scathing review of both the DGA and the DGA committee in “In the Face of Contradictory Evidence”.  Which appears in the respected scientific journal Nutrition  and accuses the DGA committee of “inaccurately representing, interpreting, or summarizing the literature [and] drawing conclusions and/or making recommendations that do not reflect the limitations or controversies in the science.”

The authors present a conclusion that is nothing short of scandalous: “The [DGA committee] report does not provide sufficient evidence to conclude that increases in whole grain and fiber and decreases in dietary saturated fat, salt, and animal protein will lead to positive health….It is time to reexamine how US dietary guidelines are created and ask whether the current process is still appropriate for our needs.”

The foundation of the popular belief about nutrition is that fat is bad, carbohydrates are good, that plant foods are better nutrition than animal foods, is not based on scientific evidence.  It never was, and in fact may be doing us harm.

For example is the use of low fat diets.  Fats are required for hormones and neurotransmitters as well as many other functions.  It is not a surprise that we have such an enormous number of the population on anti-depressants, anti-inflammatory drugs, pain pills, sleep aids, hormone replacement and more.  Essential Fatty Acids are required by the body for biochemical competency and balance.  A low fat diet is nothing short of dangerous.

WHY???
Decisions about the design of the food pyramid and Daily Requirements were highly influenced on the one hand, by the affordability of meeting the nutritional needs for the Food Stamp program, Vitamin E in particular.